Backs up calls for crack down on opponents with $100 million in new spending for FBI, DHS, DoJ

Attorney General Merrick Garland called for a “whole of society approach” to fighting domestic terrorism in a speech Tuesday, going along with the administration’s national strategy for stamping out violent extremism.

“We need not only a whole of government approach but a whole of society approach,” Garland said after praising members of the public for submitting more than 100,000 pieces of digital media to help the FBI investigate in the aftermath of Jan. 6.

“We must not only bring our federal resources to bear. We must adopt a broader societal response to tackle the problem’s deeper roots,” he continued.

Garland’s speech came hours after the Biden administration unveiled its national strategy for countering domestic terrorism, with officials telling Fox News it’s designed to cut across the political spectrum, while warning that White supremacy and “militia violent extremists” currently present the “most persistent and lethal threats.”

“In the FBI’s view, the top domestic violence extremist threat comes from racially or ethnically motivated violent extremists, specifically those who advocated for the superiority of the White race,” Garland said.

This is the type of language we’ve come to expect from autocrats in failed states. It is chilling to hear our nation’s top law enforcement officer go after his opponents so brazenly and promising to use the vast resources of the federal government to do so. We don’t have to wait for the feds to abuse their powers. It is already happening.

Two months ago, the FBI raided the home of an Alaska couple who had attended former President Donald Trump’s Jan. 6 peaceful rally near the White House.

According to the Alaska Watchman:

“Paul and Marilyn Hueper, owners of Homer Inn & Spa, woke with a start at 9 a.m. April 28 when a dozen armed FBI agents kicked down their front door in an investigation associated with Rep. Nancy Pelosi’s stolen laptop, which was taken during the Jan. 6 siege of the nation’s Capital. 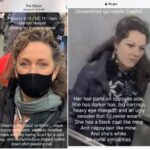 “Homer resident Marilyn Heuper (left), posted this photo on Facebook to show the physical differences between her and the woman who FBI agents were looking for when they raided her home on April 28.

“Speaking April 29 to Kenai-based radio host Bob Bird of the Bird’s Eye View, Paul recalled that he was alarmed and shocked to come out of his bedroom with seven guns pointing at him and his wife.

“It was a little alarming when I turned around the corner,” Paul said. “The first thing they did was start barking out commandments.”

“Ultimately, the couple was handcuffed and interrogated for the better part of three hours before being released. In the end, it was a case of mistaken identity.”

Bird later weighed in on the near tragedy with these comments in the Alaska Watchman, “[This] is an example of what happens when a lawless and completely illegitimate political party and administration come to power. The Democrats are utilizing the proven techniques of communism and fascism, and weaponizing federal law enforcement for political purposes. They are now reaping the fruits of the November’s compromised election. Its aftermath spells the end of freedom in America. It is no longer a threat. It is here, and none of us are safe.”

Despite assurances from senior administration officials saying their strategy is directed at violent extremists from the left and right alike, many conservatives are skeptical.

Some Republicans have taken issue with the Justice Department’s focus on the Capitol riot, alleging a disproportionate focus on the riot as opposed to criminal behavior during the protests and riots across the country after the May 2020 death of George Floyd.

Senate Homeland Security Committee member Ron Johnson, R-Wis., railed against the “unequal application of justice” he sees between the suspects involved in the Jan. 6 U.S. Capitol riot and those involved in Antifa and Black Lives Matter protests in cities like Philadelphia, Portland, New York City and Washington over the past year that devolved into criminal activity.

Our basic constitutional liberties including the Fourth and Fifth Amendments have been eviscerated by the administrative state at the Justice Department that has been put on steroids by President Joe Biden and Attorney General Garland.

Citizens of the United States have a right to the presumption of innocence, a right protecting them from the government engaging in malicious prosecutions against political opponents and to be free from the surveillance state snooping into personal business with no probable cause.

In addition to the raid on the Alaska couple, government agents raided Roger Stone’s home and then maliciously prosecuted him for crimes he did not commit just because he was Trump’s friend.

They have raided Rudy Giuliani’s home on a fishing expedition just because he was Trump’s personal attorney and supporter.

It is time that Congress wake up regardless of party and stand against executive branch abuses of power and the ongoing politicization of federal law enforcement agencies by any means available, including withholding funding in this year’s appropriations bills.

Catherine Mortensen is Vice President of Communications for Americans for Limited Government.

This post, Biden administration calls for ‘whole of society approach’ to fighting political opponents, was originally published on The Daily Torch.